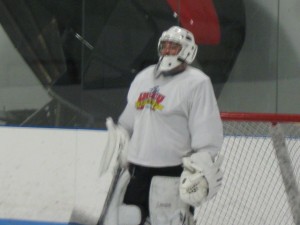 Sorry for my lack of reporting the last few weeks. The highlights as I remember are our faithful goalie Kyle posted a shut out a few weeks ago! For those of you regulaaaaaaaa’s on Tuesday Morning, you know this is a rare event. I’m not sure if the star’s were all aligned, the defense was spectacular, the opposing offense sucked or Kyle as we know he can, was standing on his head stopping everything.

We’re all glad to have Walter back. We missed his enthusiasm while healing up from a foot injury. Welcome back Walter!

As for today’s write up….. I was out today due to a hand injury that I got on Thanksgiving morning…and I have received reports as well as graphic photos of Brian’s gash in the ass from the thanksgiving skate. Injury’s or no injury’s, thanks to Nev for putting together the Thanksgiving Skate for the last 14 years. I remember taking Matt down to the first couple of years when he was like 5 or 6 and skating with him before the games and then letting him run the score board(wow how time flies) ….. a little walk down memory lane, I’m feeling old! 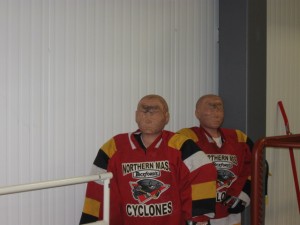 This is what I got from today’s on ice reporters after asking for a short write up in my absence :

Nev said : Scott Smith was there. and Brian’s ass doesn’t look that. bad.

Gary said : The first game puck got deflected out of the rink and we had to get another one ??

Smitty said : On another really short note…Nev took out my stick and obviously likes Brian’s ass!

There you have it Smitty was there , Brian’s skate in the butt wasn’t that bad, you lost a puck, Nev Vicious is breaking sticks because he has a new chair and like’s brian’s ass and Black won 7-3 because of Bobby’s Speed. I guess you had to be there to appreciate it !!!

Hopefully see you all next week.