Well it’s been a week or so since I last checked in and I have made a few adjustments to my knee replacement rehab. About a month ago one of my buddies said he was going to yoga 2 times a week with his wife. Part of me was trying to hide the eye roll and the other part of me was curious about it.

I asked him a few questions about it and he was amazed at how good he felt after he got used to doing the yoga routine. So I had been thinking of trying it out and then one of my neighbors and I got talking one day, he was wondering how my knee was doing and how rehab was going…… The conversation went on for a few minutes and then He say’s to me you should try yoga… I told him my buddy goes to yoga and I had been tossing it around. So then he tells me about the place he goes, Bikram Yoga Nashua, right near the downtown area.

I asked a few questions about it and he was the same as my buddy just saying how great it was for your joints and how you sweat and relieve stress in the 105 degree room ……  I’m like What ? 105 degree room !! So he goes on to explain Hot Yoga, which I had never heard of and to be honest to be even considering yoga is a stretch for me to begin with.

So I ended up going to the studio on Friday and met Laura the owner (and head instructor) . I was a little curious as to what some 55 year old guy with a recent knee replacement was going to be able to get out of “hot yoga’. I explained to her my situation with my knees and how used to (and hope to get back to) play ice hockey regularly. I expressed my desire to get exercise in a low impact way for now(and maybe from now on) and wondered if yoga was for me.

She was very nice and thorough explaining the benefits of Hot Yoga and invited me to a Saturday morning class. I thought about it and said what the hell, I’ll give it a shot. I needed a mat(or I could rent one for a buck), a towel which I thought was for my shower after and it was  highly suggested to wear clothing….. less is better … OK . 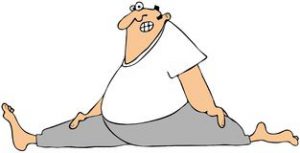 So I showed up Saturday morning at 9 for the 9:30 class to check in with gym shorts, a hockey t shirt , sneakers and socks. I guess shoes and socks are a no no in yoga so they came off. After I checked in and rented my mat I went in to the “hot room”. OMG … it really is 105 degrees. After 10 minutes in the room I realized why people wear yoga pants and under amour type clothing . Just the pre class stretching and getting used to the room temperature caused me to sweat like a bastard. Then as other class members started coming in I realized the towel I was to bring was to put on the mat to absorb the sweat not for the after work out shower…. Oh baby bring it on !

To make a long story short, I got through the class. I tweeked some of the routine to allow for my knee issues but I did pretty good for the first time. Some of the guys I met in the class thought I did good for the first time and I have to say 90 minutes in that room doing the exercises was the most strenuous thing I have ever done. I have never sweat like that before. I felt a little off after but as the day went on I felt good and I’m looking forward to doing it again.

I decided to sign up for the program they offer to see if “hot yoga” will work for me. Bikram Yoga Nashua offers a one month deal for unlimited classes for $30 …. a great deal. After that it’s a $89 per month fee for unlimited or $10 per class pay as you go. So I’m committed to doing the month to figure out if I’ll keep it going.

So Tuesday morning which was  Hockey morning with the TMHL since 1995 or so …. Is now going to be HOT YOGA morning for at least while. I’m seriously hoping to get in better shape with the yoga and strengthen up so I can get back to hockey and keep up both routines to stay in shape and be happy.

See you guys at the rink soon to test out the knees in a pre-skate. Leave a comment on the site if you have ever done or are doing yoga. Let me know you’re thoughts and benefits with it.

Bikram Yoga is the original “hot yoga.” The yoga room is purposely heated to 105° to promote weight loss, keep muscles warm (allowing for deeper, safer stretching), increase the heart rate for a better cardiovascular workout, and cleanse the body of toxins through sweat.

It’s never too late, its never too bad, and you are never too old or too sick to start from scratch once again.–Bishnu Ghosh