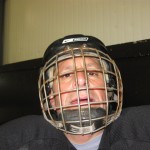 This mornings game was questionable due to the big storm last night (Sandy). NH faired ok. Some of the guys had power outages at their homes but all in all everyone faired well. With that said where was everybody. We had an elaborate text / email system layed out to insure optimal communication. Brad was offered up by Brian to get to the rink early to check and see if the power was on. Then Brad sent a text to our TMHL leader Paul at 4:15 AM to give him the word and then Paul sent out the all anticipated email that ” Hockey is on” at around 4:30Am. 😆

So my question is “Where were all the hockey faithful ?” Not only did we have short benches, total of 13 guys and our 2 faithful goalies, but the ice was soft. The compressors and blowers were not working. It reminded me of the White rink at Skate 3 when we played there. That feel of Summer in August, humid and foggy. So not only were we short players, sucking wind, we were sucking warm humid wind and as for me, by the end of the game, it felt like I was skating in slush. 😈 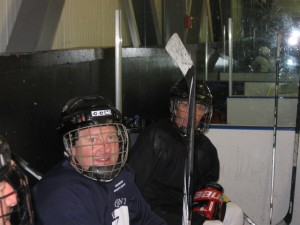 Kind of like pond hockey in early Spring. So for all you guys who slept in or had to deal with kids being home or just blew off hockey, you missed a good skate or good exercise I should say.

The game started good for white, they keep it in the Black teams zone for what felt like 20 minutes (probably a solid 6.5 minutes). Thanks to Kyle, the White team didn’t suffer the, playing catch up, game. Black finally got their act together and put a few by Joe. I will take credit for a quality screen (fat ass) that allowed Paul’s knuckle puck to evade Joe.

Thanks to Scott on Black and Jay’s guest appearance for the White team, those two guys kept the speed factor balanced out. Great hustle by all considering the ice sucked and the puck was very sticky. I think everyone had a good time even though conditions were not the best.

I remember the days when I actually looked forward to a short bench and more ice time…. haha. Those days are gone for me , between the soft ice and humidity in the building I would have been sucking wind with a full bench!

At this time I would like to give an honorary mention again to Brad for his faithful service of getting to the rink every week early and opening up. 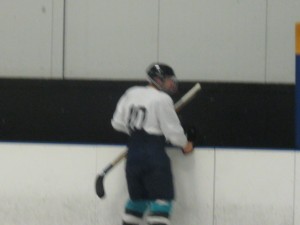 For all of you who blew off today…. we’ll see you next week ! Be ready!