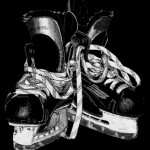 Thanks to Guest Writer Brian Twombly for an awesome game summary :

What appeared to be shaping up as a smack down of the aging black team by a much younger white team turned into a battle for the ages Tuesday morning.

White jumped out to a quick commanding lead thanks to the “kid line” of Keith Vaillancourt, Joe Amato and the college bound Matt D’Angelo.  Early in the game the aging black defense had no answer for the quick hands and crisp passes of the kid line and fell behind 11 – 5.

The White defense was aided by the return of Kent Johnson who made up for his rusty skating and lack of conditioning with his solid positional play.  Kent commented that when you have a 10 foot wing span and 6 foot stick skating is not a priority. 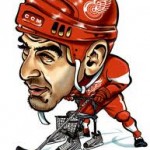 Following a rocky start by goal keepers Jim Runyan and Ron Normandin both locked it down at the 30 minute mark and turned in solid performances for the balance of the up and down battle.  With 20 minutes left in the game black finally began to use their superior experience to confound the white attack.

Black closed to within 3 with 10:30 left in the game thanks to a nifty roofer by the young upstart Andrew Morrissette, completing what is sure to be his first of many Tuesday morning hat tricks.   Andrew mentioned in his post-game interview that he’d like to thank his Canadian born mom for his  inherited skill, speed and soft hands.  Black eventually made it a one goal game with 2:30 left on a typically high Twombly slapper from the point that fooled Runyan and found its way to the twine.

The goal was not without controversy with Brad Ayers initially waiving it off thinking it had been redirected by a black high stick.  A review of the play showed the puck clipped Runyan in the chest and squirted through under his stick side arm.  Despite a last gasp black attack with Paul DeRoche endlessly circling to keep the pressure in the white zone for the entire last minute of the game Runyan shut the door preserving the white win 13 – 12.

Other game highlights worthy of note this week… 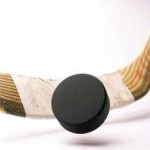 Steve P continued his strong play while battling a shoulder injury, Gordie made a play on defense, Jim R did not waive off a goal, Gary did not fall down, Nev passed on multiple occasions, white missed the aggressive stick checking of  John Green but Jimmy Druckner picked up the slack and finally, Chris Peckham continued his physical play, taking down opposing players on multiple shifts.