Skip to content
Another Colorful Summary by our Faithful Goalie Joe 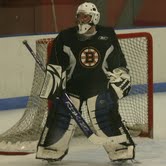 Waking up at 5:30 there was a feeling of nervousness, could I possible fall victim to the same fate that was dealt my adversary Ron Normandin. Packed the car with the goalie equipment I headed to Cyclones for a 6AM puck drop. Walking in time was in slow motion, you knew something great was about to occur. Walking into the dressing room, it was the same banter, but something was amiss. People were not changing in their normal locations. This isn’t good for the psyche.

Teams form up on ice. Black skating around looking confident centering around their muscle Scott Gagnon. White gathering their thoughts for what was to become an epic battle.

Puck drops. Both sides are locked into a mid-ice battle, trying to connect on passes to create a breakout opportunity. White strikes first, Black looks nervous but again, climbs on the back of Scott. Black scores.

The scores remain close but I notice something isn’t right. Ahhhhhhh Black assigned a “secret weapon”. A rogue score keeper!!!!!!!!!!!!!!!! One of their own. The scoreboard reflects the wrong score. White goalie isn’t happy. How could this be happening to white two weeks in a row? White quickly realizes the scheme and fixes the situation.

For the next 30 minutes the two teams battle back and forth. Never more than a 2 goal lead. Black had a few chances to score by Walter “I can’t hit the net” Abucewicz banked a few off the back boards. Frustrated, black enforcer Stephen “I can’t turn” Clark tries to take out the white goalie but was quickly shutdown.

White charged forward leaning on their veteran Roland “Albatross” Harris. Slicing through the wounded Black defense and creating scoring opportunities. White wouldn’t stand for this and with the testicular fortitude they pressed forward. Scoring became a test of winning and losing battles in front of the net. With the duo of Scott Gagnon and Neverett Smith Black was determined to not let this one get away. But White never faltered. 65 minutes pass…the buzzer sounds…but the game, it’s a tie!!!!!!!!!! 10-10.

“LAST GOAL” is heard shrieking throughout the rink!!!!!!!!!!!!!!!!!!!!! Last goal,…what a way to finish. No timeouts, no shootouts, back and forth hockey. But what happens next is unimaginable. THE ROOKIE!!!!!!!! With youth and inexperience in beer league hockey, Andrew “Not my father’s hands” Morrisette say’s “climb on these shoulders” and grasps greatness!!!!!!! Breaking in, slicing and dicing, juking and jiving, dismantling the Black defense and walking in to the circle.

With a view from the opposite end of the ice the “kid” goes top shelf…right up there where momma keeps the peanut butter. The crowd “two scary guys in the corner” raise their hands. “don’t even think they have them” in jubilation. WHITE WINS…WHITE WINS…….

Great game and fun had by all. What saga will unfold next week. Stay tuned.